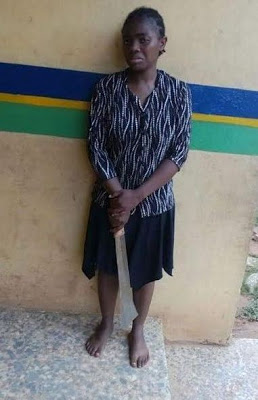 According to Nation reports that the suspect, Oluwakemi Etu, has been arrested.

According to the report, Oluwakemi had invited Kehinde to her residence at the Erinlu area of Ijebu – Ode, Ogun State to spend the weekend with her.

It stated that they had an altercation in connection with the move to marry another wife, and also had sex before Kehinde fell asleep.

She attacked him with a cutlass during his sleep, inflicting deep wounds on his chest, arms, shoulder and lower part of the head in his sleep.

The incident was confirmed by the Ogun State Acting Police Public Relations Officer, Abimbola Oyeyemi. Oyeyemi added that the suspect has been arrested by policemen from the
Obalende Divisional Police Headquarters, Ijebu – Ode.

Odunsi Idowu, on Saturday, shared disturbing photos of a man, Kehinde Etu, who was allegedly stabbed with a cutlass by his wife for planning marrying another wife.