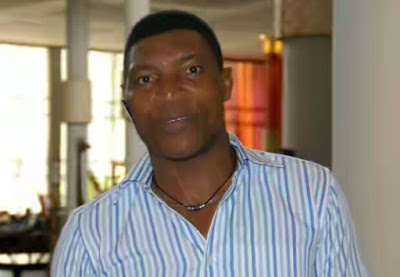 The legendary goalkeeper was in blistering form during Friday’s novelty game for WJS Legend edition that fans tip him for Nigeria return
Peter Rufai came out of retirement to join the likes of Victor Agali, Victor Ikpeba and more in the Winihin Jemide Series Legend edition celebrity football match against Nigeria entertainment top shots.
The 53-year-old, who won the 1994 Africa Cup of Nations with Nigeria, kept a clean slate and made series of breathtaking saves that fans want him back in the Super Eagles.
If wishes were horses, Rufai might be wearing his gloves once again for the three-time African champions who begin their quest for a place in Russia 2018 Fifa World Cup against Zambia in October.
Who knows, coach Gernot Rohr might hand him a starter’s shirt ahead Carl Ikeme and forget about recalling Vincent Enyeama to the senior national team.
Advertisements
sport