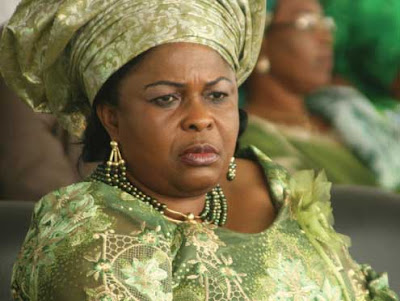 Following the recent outburst over reports that former First lady Patience Jonathan had claimed ownership of a $31.4 million found in the account of a company currently under investigations for fraud(read here), the Chairperson of Ijaw Mothers Union, Doris McDaniels, has replied Patience Jonathan’s critics, stating that the former first lady can own any amount of money as she was the wife of a deputy governor, governor, Vice President and then a President.In an interview with Vanguard, McDaniels said;

“I will commend Mrs Patience Jonathan because if this is the allegation against her, then it is funny. So you mean the wife of a former deputy governor, governor, Vice President, Acting President and President cannot own this kind of money, yet wife of President Muhammadu Buhari that is less than two years in office can travel with the kind of bag as alleged recently? Then this is a funny country. If high-profile government officials,can own properties in Dubai, yet we say wife of a former President can’t own this money, then Nigeria is a laughing stock. EFCC should follow the law.”she said

However a lawyer and National Coordinator, Centre for the Vulnerable and the Underprivileged, Oghenejabor Ikimi, said the former first lady needs to be investigated since her office as a first lady is not known to come with remunerations.

“Patience should be investigated on how she got the money. We agree that she was the wife of a Deputy Governor, Governor, Vice President and lastly President. The sum is frightening, knowing that her office, even as First Lady, does not attract remuneration. Even if it did attract cash benefits, was it in dollars and how much did she receive? If the anti-graft agencies find her to have amassed such wealth illegally, she should be tried to face the music. She is not bigger than the country as former First Lady.”