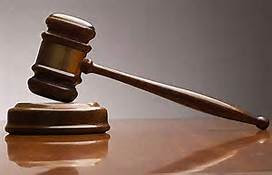 Onwu and two others allegedly forged the signatures of their dead fathers, who were Elders of Ezekiel Hart family of Grand Bonny Kingdom, in Bonny Local Government Area (LGA) of the state to sell portions of their family land located at Ikom Ikom, in Oyigbo LGA of same state to unsuspecting members of the public.
The charge was brought against them by the Inspector-General of Police, Ibrahim Idris, through the office of the Assistant Inspector General of Police, Zone six, Calabar in Cross Rivers state.
The Soldier who retired 30 years ago was charged with a Pastor, Israel Zacchaeus Ezekiel Hart (50), and Fubara Zacchaeus Ezekiel Hart (48).
They were charged with conspiracy, forgery, impersonation, extortion and fraud.
They however pleaded not guilty to all the counts and were granted bail in the sum of N4 million, by a chief magistrate court in Port Harcourt, the Rivers state capital.
A Deputy Superintendent of Police (DSP), attached to zone 6, Calabar, Iroka Onwunta prosecuted the matter.
Presenting the charge before the court, Onwunta alleged that the accused persons conspired among themselves and forged the signatures of the deceased elders of Ezekiel-Hart family of Grand Bonny, in Bonny Local Government Area (LGA), of Rivers state, their fathers, with the intent to defraud unsuspecting members of the society.
He said the offence was committed between 1992 and 1994 at Ezekiel-Hart family, Grand Bonny Kingdom’s parcels of land at IKom IKom in Oyigbo LGA of the state.
According to the charge sheet obtained from the court, the accused persons, allegedly forged and signed the signatures of Chief Benoni Ezekiel-Hart, Zacheaus Ezekiel Hart and Chief George Ezekiel-Hart who died in 1975, 1990 and 1995, respectively to sell portions of the family land at Kom Kom, Oyigbo.
The prosecution also said that the action of the trio amount to impersonation, with which they defrauded innocent Nigerians different amounts of money, ranging between N100,000 and N350,000 and thereby committed offence punishable under sections, 70(1), 467(2), 516(A), 484, and 419 of the criminal code cap 39, volume 11 of the Laws of Rivers state, 1999.
The trio pleaded not guilty to the six count charge levelled against them and the magistrate, A. O. Amadi-Nna granted them bail in the sum of N4 million with one surety in like sum.
Source: The nation
Advertisements
news