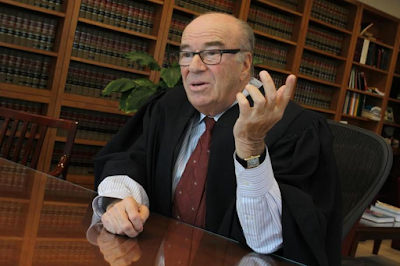 Nigerian woman who pleaded guilty to entering the U.S illegally to escape persecution in Nigeria because of her sexual orientation, was sentenced to time she already served, i.e- eight days she spent behind bars after her arrest in February this year. Yewande Beatrice Okubanjo, who faced up to six months behind bars for visa fraud, knelt down on the floor in front of the judge in Brooklyn Federal Court and bowed her head repeatedly to show how grateful she was for being spared a jail sentence.
Judge Frederic Block (pictured) is hopeful Okunbajo’s application for political asylum is granted.

Okubanjo admitted that she was desperate to flee Nigeria and paid someone $1,750 to prepare a visa application that falsely claimed she was traveling to a family wedding in Atlanta, according to court papers.When U.S. Customs and Border Protection officers called the church listed on the wedding invitation, they learned there was no such wedding on that date.Okubanjo’s lawyer, Samuel Jacobson, said his client had been subjected to beatings and ridicule on account of her sexual orientation, and called Nigeria one of the most homophobic countries in the world where merely displaying “same-sex affection” could land someone in prison for 10 years.

“When her husband found out that she was gay, he became physically abusive,” Jacobson stated in papers. After Mrs. Okubanjo fled from the marriage, the husband’s family took her 5-year-old child, Desire Okubanjo, away from her.”

In her asylum application, Okubanjo wrote: “I was desperate to leave Nigeria because I was afraid that I would be killed or imprisoned because of my sexual orientation”
Source: New York Daily News