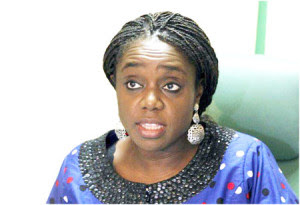 Kemi Adeosun the Currently Minister of Finance react to Nigeria economy  after the Federal Executive Council (FEC) meeting in Abuja yesterdaay.described the country as being in its “worst possible time”, but stressed there is hope for Nigerians.

According to The nation report, National Bureau of Statistics (NBS) released its indices which showed that the economy had contracted for the second consecutive quarter.

The NBS report showed that oil production plummeted to 1.69 million barrels per day (bpd) in Q2, down from 2.11 million bpd in Q1, with oil-based GDP contracting by 17.5 per cent in Q2.

The Oli price has crashed to less than $50 per barrel. Besides, Nigeria’s production output has tumbled by over 400,000 barrels due to militancy in the Niger Delta.

The naira also dropped in value because of inability to match up with the demand for the dollar. Dollar exchanges for over N300 in the inter-bank market.
The report said 4.58 million Nigerians have become jobless since last year, with the first and second quarters of 2016, adding 2.6 million to unemployment figures of 1.46 million recorded in the third quarter of 2015 and 518,102 in the fourth quarter of 2015.

“The continuing decline in the value of capital imported into the economy is symptomatic of the difficult period that the Nigerian economy is going through.”

It is the worst economic recession in 29 years.
Reacting to the NBS statistics, Mrs Adeosun said: “It’s the worst possible time for us. Are we confused? Absolutely not. How are we going to get ourselves out of this recession? One, we must make sure that we diversify our economy. There are too many of us to keep on relying on oil.
“We can see what happened at the output data of the oil and gas sector. What’s happening in the Niger Delta has dragged down the GDP of the entire economy. We’re too dependent on oil whereas 87 per cent of our GDP is oil. So let us drive those other areas.”

In her view, “we have to invest in capital projects”. “No, we are not confused, the time are confusing but we are not confused. We are extremely focused. We know that if we can just bear and get through this difficult period, Nigeria is going to be better for it.