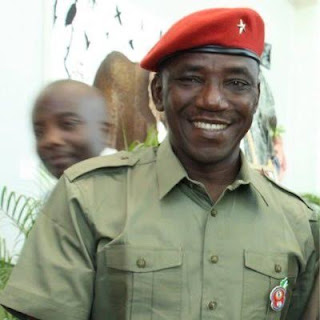 Minister of Sports Barrister Solomon Dalung has blasted journalists who write unconfirmed, unverified and defamatory stories about him, urging them to desist from such acts. Dalung, on a Facebook post titled ‘Quote me Right’ denied granting an interview to Brila FM where he was reported by some media houses to have said Athletes don’t need much training to succeed at the Olympics and challenged sports writers to quote him right...
“The last interview I granted was at the flag-off of the NCC Tennis league at the Abuja National Stadium. I was asked to compare the performance of Nigerian athletes at the just concluded Olympics and the ongoing Paralympics and I said that the performance of Nigerian athletes at the Paralympic Games has established the fact that apart from the right training there was also need for the determination to excel.’ He wrote on his Official Facebook page
‘I said that they all trained under the same conditions like the Olympic athletes. That, apart from not having adequate preparations, what then can we attribute to the performance of the Paralympic athletes who have done so well at the Games’
‘That, if their argument was lack of good training, the Paralympic athletes went through the same. In fact they trained here in Nigeria and I asked what was the secret?’
This was what I said to the journalists who were at the stadium for the tennis event” .
According to the Minister, defamatory stories were capable of bringing people to public ridicule .
“We need to go back and do a proper X-Ray of the two circumstances to be able to make the best of of a bad bargain because the poor preparation was created due to paucity of funds, but the Paralympic athletes are making Nigerians proud here in Rio”.
“The current economic recession has a relationship with the manner public affairs was managed in the past. We are not making any excuses for our inadequacies but we will definitely place the yearnings and aspirations of our people dutifully as our priority. The absence of strong institutions has been our national predicament which has affected negatively, policy sustainability. We appeal for more tolerance and your understanding as we embark on a quick repositioning of things for the benefit of all”
Advertisements
SPORT NEWS