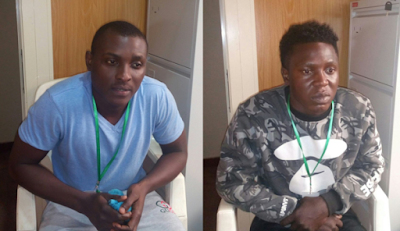 The Economic and Financial Crimes Commission (EFCC) has arrested the duo of Egbedayo Semilore,26, and Elijah Jeremiah, 29, a self styled fashion Director of Datsol Industries Limited for alleged Internet fraud.

While Semilore engages in Internet love scam, Jeremiah, 29, is a predator on online auction sites.

Semilore while posing as an Afghan based US Army officer with the names Sergeant Shaft Pagan and Perrie Edingson, allegedly defrauded unsuspecting ladies. His last victim is one P. J. (full names withheld), a US national from whom he claimed to have obtained about N4 million in tranches and bought himself a car.

Though arrested differently, the suspects have both made confessional statements.

Jeremiah confessed to using fake instruments to order goods from China through online auction sites. According to him, he downloads Letters of Credit purportedly issued by Scotia Online Financial Services of Scotia Bank Worldwide from Google with which he pays for his purchases.

The auctioneers, unaware of his antics often fall victim of his game by shipping the goods to him ahead of confirmation of payment.

Semilore, during interrogation also confessed to have used proceeds of romance scam to sustain a flamboyant lifestyle and bought himself a 2010 Lexus car which he registered in his mother’s name.

The EFCC says the suspects will be arraigned in court as soon as investigation is completed.