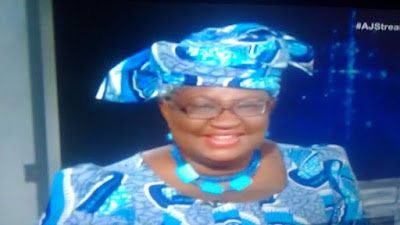 Former Minister of Finance, Ngozi Okonjo-Iweala was a guest on Al-Jazeera ‎where she was asked if she would be open to take position in the current administration and also to comment on the current state of the economy. Responding, Okonjo-Iweala said

“One of the things you learn as you get wiser is to talk less as you grow older. I have spent my time contributing to the country. It will be better to leave those managing the economy to do what they know how to do. There can be solutions.
I served my country for seven years and it was a great honor. The second time was very tough but it is still an honor. I am not the only person who is a repository of knowledge. There are other people who can equally try their hands in running the economy”she said

Asked how she fought corruption during her time in government, she said:

“It was a very tough fight, I must thank my team, you don’t do it alone, I had the support of an economic team in the Ministry of Finance. It was tough because at the end of the day you need to have some principles.”