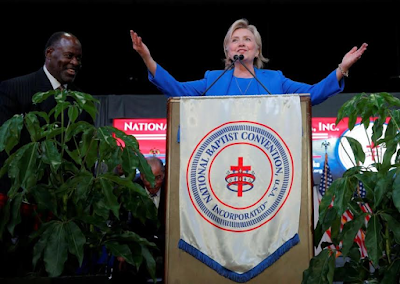 She said it During a speech at the oldest and largest African-American religious organization in the U.S – Methodist church, the Democratic nominee talked about her relationship with God and how it’s affected her political and public service life.

“I want to leave aside the politics and do something that doesn’t always come naturally to a Midwestern Methodist. I want to talk about how my own faith and how it led me to a life of service and how it will guide me as President,” she told the enthusiastic crowd at the National Baptist Convention in Kansas City. For me, it’s always been about trying to live up to the responsibility described by the Prophet Micah, that ‘we do justice, love kindness and walk humbly with our God,’” Clinton added.

After making the warm remarks, she then attacked Donald Trump.

“We are facing a candidate with a long history of racial discrimination in his businesses, Who traffics in toxic conspiracy theories like the lie that President Obama is not really American.” 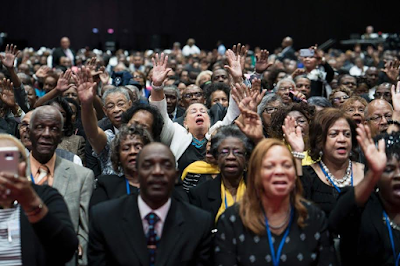 Those who look at the African-American community and see only poverty crime and desperation are missing so much,” she said, referring to Trump’s recent cynical “what do you have to lose?” statement at black voters.

If he cannot respect all Americans, how can he serve all Americans, We must reject (his) hateful, bigoted rhetoric. You deserve a sustained commitment to expanding opportunity, equity and justice