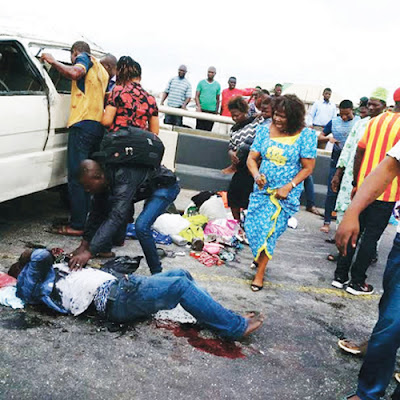 Three persons were yesterday confirmed dead and 12 others injured in separate accidents in Lagos at the weekend.

The accidents occurred on Ibeju-Lekki Link Bridge and the Third Mainland Bridge on Saturday and Sunday respectively.

It was learnt that a Nissan Primera saloon car with three occupants rammed into an oncoming truck on the Ibeju-Lekki Bridge.

The Nation gathered that the driver, who was on a high speed, wanted to avoid a stationary truck before ramming into the oncoming vehicle.

The driver, identified simply as Biodun, was said to have died on the spot. Two others died in the hospital. The injured ones were rushed to Akodo General Hospital by officials of the Lagos State Emergency Management Agency (LASEMA).

The accident on Third Mainland Bridge was said to have occurred after a commercial bus, marked FST 668 XR, fell on a BMW car, marked KRD 294 CN.

It was gathered that of the 15 occupants of the commercial bus, eight sustained severe injuries including the driver who was said to have hit his head on the ground.

Contacted, the General Manager LASEMA, Michael Akindele, blamed the accidents on over speeding.

He said: “There was no loss of life on the Third Mainland Bridge accident and one person died at the Ibeju-Lekki mishap. Both accidents were caused by over speeding. Ten persons sustained injuries yesterday. Some were treated at the scene while others were rushed to the trauma centre by LASAMBUS.

“The vehicles have been cleared off the road for vehicular movement. Motorists are advised to avoid over speeding.”