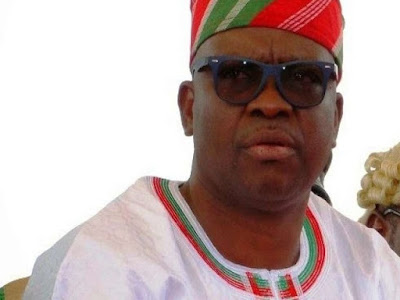 The charismatic governor  of Ekiti state  Ayo Fayose has rated his performance so far, as greater than that of any other administrator of the state since it was created
says his policy remains to put Ekiti first.

Ayo Fayose declared himself as the best performing governor of the state since its creation in 1996.  The governor, who spoke yesterday through his chief press secretary, Mr Idowu Adelusi, said out of 11 governors and administrators who had governed the state, none has measured up to his performance.

The Governor said,“Ekiti was created 20 years ago. It is the only one among the states created at the same time that is yet to have either airport or airstrip. Still, the opposition does not see this as a minus for the state. I don’t know how to play politics with development of the state. To me, Ekiti first. The dirty politics here is responsible for Ekiti having almost 11 governors as opposed to Ebonyi with four since 1996. During my first tenure, the opposition said there was no need to dualise roads in the state capital, everybody is enjoying it today.”

“My priority is to leave Ekiti better than how I met it. What I did during my first tenure are those visible things in the state today. I may be tough, I may be controversial, but all these are catalysts to my performance. I built the first governor’s office, dualised roads in the state capital, constructed roads in all nooks and crannies of the state, put on ground many structures for use of the state. I always scored the first position in development of the state.”

My detractors know what I am made off and are disturbed by my landmarks. And that is why they will always concoct lies to distract me or slow me down. I am not a rookie, I am a second term governor, very experienced and learned in grassroots politics. If it is not photocromic, it is soldier used to rig.

If it is not Dasuki money today, perhaps tomorrow they will fabricate many unimaginable lies. They said building flyover is a waste, how many vehicles ply Ekiti roads. Similarly, they criticised my plan to build airport for Ekiti to the extent of poisoning the minds of the land owners against our good intention,” he lamented.

Naij report that he made these submissions preparatory to the 20th anniversary of the state coming up on October 1. Rating the performance of the administration, the governor said Fayemi had only three achievements to his credit in four years. These, according to him, included: the new government House, dismissed as elephant project, the uncompleted civic centre and uncompleted state pavilion. The pavilion project, he said, gulped huge state resources without any concrete use for the people.

In a similar vein, Governor Ayodele Fayose of Ekiti has reportedly signed documents directing the state’s accountant-general to immediately refund monies over-deducted from the salaries of teachers who had bought some facilities from government during the previous administration of former Governor Kayode Fayemi.

Fayemi is now the minister of Solid Minerals Development in the administration of President Muhammadu Buhari. A few years ago, teachers had bought cars and laptops among other facilities from government on loan with an arrangement for monthly installmental deductions from their salaries. According the Ekiti state chairman of the Nigerian Union of Teachers (NUT) , Comrade Samuel Akosile, the over-deductions from the teachers’ salaries has been a perennial problem but when brought to the notice of Governor Fayose, he promptly set up a committee to look into the complaint, giving an ultimatum of 30 days to report back to him.