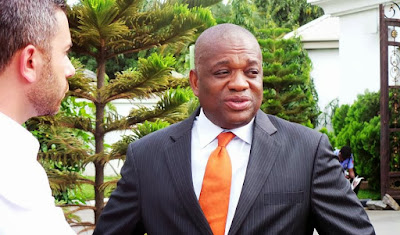 Former Abia state governor, Orji Uzor Kalu, has appealed to Nigerians to give President Buhari more time to address our economic challenges. Kalu made the call when he hosted Catholic Bishops and the diplomatic community at his Abuja home yesterday.He said Nigeria was in recession in 2014 and was able to come out of it and that hopefully this administration will bring Nigeria out of this current economic recession. He noted that President Buhari had spent just one year out of his four year term in office.

“I’m calling on Nigerian youths to be of good use to themselves. Let me be honest with you, I cannot judge Buhari. He has a four-year mandate to turn things around. He still has time and I expect that he will do something. Young people might be feeling frustrated. Government must not do everything. The only thing is that government is not paying enough attention to the manufacturing sector. If I am government, I will pay attention to manufacturing and agriculture. You pay attention through the entrepreneurs by giving them single digit loans and opportunities. All the enterprise done by government will not work until they see us as partners. When Dangote was starting his cement factory, he was encouraged by the government. Today, he is all over Nigeria. The problem is people are envious and jealous; they see Orji Kalu who is rich, but they do not know what I have gone through to get to this level. They want to be like me, and that is not possible. Government should grant more incentives to the entrepreneurs. In June 1999, I told President Olusegun Obasanjo how to solve the power sector by doing something differently. We brought people and they promised to fix the power problem up to 75 percent. But Obasanjo refused. The amount needed was N14 billion. If Nigeria can fix power and insecurity, the country will move forward”.