This is coming in less than 24 hours after Aero Contractors Airlines, Nigeria’s second largest commercial carrier, announced an indefinite suspension of its scheduled flight services and its staff with effect from Thursday, September 1, 2016.

A statement signed by the Head of Commercials of the airlines, Serah Awogbade in Lagos, said that the maintenance of the A319 fleet would be completed on or before September 15.

The Director-General of the NCAA, Capt. Muhtar Usman, explained that the decision was taken in order to ensure that the airline carried out the required maintenance of its aircraft.

Usman, however, refuted claims that some of the domestic airlines were winding down their operations regardless of the fact that they had suspended flight services.

In a statement issued by the NCAA on Thursday and signed by its DG, it said, “The First Nation Airlines on its part is in the middle of an Engine Replacement Programme for one of its aircrafts. Another aircraft is due for mandatory maintenance as allowed by the regulatory authority.

It said that the measure was to ensure that passengers continued to enjoy safe and reliable service that the airline was reputed for. 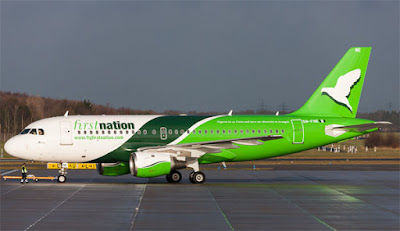 “Current foreign exchange constraint, coupled with over 70% devaluation of Naira partly contributed in no small measure to this development. The airline’s plan remains on track to reinstating service as advised herein,” it said, adding that it was aware of a press statement by the Nigerian Civil Aviation Authority (NCAA) on the issue.

It said that at FirstNation, safety was its priority and it looked forward to reinstating service on completion of fleet upgrade.

The NCAA in its statement earlier explained that FirstNation Airlines was in the middle of an Engine Replacement Programme for one of its aircraft.