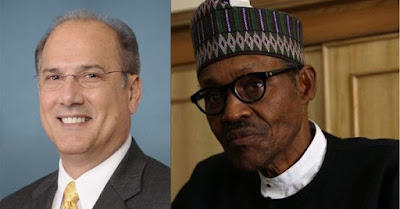 The Nigeria Government has condemned the letter of a US Congressman, Tom Marino, asking his country to withhold security support to Nigeria, describing it as “out of tune with reality”.

Marino had written the letter to the US Secretary of State, John Kerry, alleging infractions on some principles and local and international regulations and conventions by the President Muhammadu Buhari’s administration.

In a statement issued on Sunday in Abuja, the Minister of Information and Culture, Lai Mohammed, said that the allegations by Marino were imaginary and that he was poorly informed about the issues he commented on.

He wondered why the congressman did not take the pains to get first-hand information from the US Embassy in Nigeria or any other credible source before engaging in “what is nothing but a propaganda of his own imagination”.

According to him, by asking the US to refrain from selling warplanes and other military equipment to Nigeria based on a faulty premise, the congressman has demonstrated a poor understanding of global security issues.

“Insecurity anywhere is insecurity everywhere. Had Congressman Marino understood this, he would not have made the kind of call he made concerning the US security assistance to Nigeria. The Boko Haram insurgency that Nigeria has decisively dealt with under President Muhammadu Buhari is not just a Nigerian problem but a regional and international crisis,” he said.

Mohammed said that Marino was wrong when he alleged that Buhari did not “demonstrate a commitment to inclusive government and the most basic tenets of democracy – freedom to assemble and freedom of speech”.

“An administration that operates purely on the basis of respect for the rule of law and a strict adherence to constitutional order is not one to deny the citizens of their constitutionally-guaranteed rights.

This administration therefore does not need the goading of Congressman Marino or anyone for that matter to do what is right.

Concerning running an inclusive government, had Congressman Marino done his homework before dispatching his letter, he would have realized that no part of the country is left out in the distribution of political appointments.

The appointment of ministers was done in accordance with the Constitution that mandates that the President must appoint at least one minister from each of the 36 states and the Federal Capital Territory.

Had the Congressman sought information from credible sources before engaging in a flight of fancy, he would have been presented with comprehensive information on the appointment of CEOs for Federal Government’s parastatals, agencies and commissions.

The appointments were almost evenly matched along the line of the six geo-political zones in the country, with the North-West having 51, North-Central, 46; North-East, 45; South-East, 41; South-West, 45 and South-South, 45.

The Congressman may wish to note that each geo-political zone comprises six states, with the exception of North-West (7) and South-East (5),” he said.

The minister said that Marino’s description of the Buhari’s administration’s anti-corruption efforts as “selective” was a tired argument that clearly showed that the US lawmaker must have appended his signature to someone’s concocted line.

“That line was invented by those seeking to cause an unnecessary distraction from the administration’s anti-corruption efforts, and it has been roundly rejected.

Congressman Marino’s decision to exhume the dead postulation without an iota of proof is a reflection of whose side he has taken in the ongoing efforts to rid Nigeria of corrupt elements.

Needless to say that the anti-corruption battle will continue unhindered, irrespective of whose ox is gored. And in this fight, only the guilty needs be afraid,” he said.

Mohammed said Nigeria was delighted that Kerry, to whom the Congressman addressed his letter, was more knowledgeable, better briefed and definitely more hands-on concerning Nigerian issues.

Dear Secretary Kerry, I am encouraged by the personal interest you have taken in aiding Nigeria and its administration as it takes on endemic corruption, multiple insurgent movements, and a faltering economy. However, I believe there are a number of warning signs emerging in the Buhari administration that signal ‘the man who once led Nigeria as a military dictator might be sliding towards former autocratic tendencies’.

I would urge the U.S. to withhold its security assistance to the nation until President Buhari demonstrates a commitment to inclusive government and the most basic tenets of democracy: freedom to assemble and freedom of speech. A logical start towards this commitment is for the Nigerian government to hold accountable those members of the Nigerian Police Force and the Nigerian Military complicit in extra-judicial killings and war crimes.

In the last six months, Nigeria’s military has unlawfully killed at least 350 people and allowed more than 168 people, including babies and children, to die in military detention.

The Secretary to the Government of Kaduna State even admitted to burying 347 of those killed in a mass grave. And while President Buhari promised swift condemnation, his words rang empty. Instead of swift reforms, Buhari chose to reinstate Major General Ahmadu Mohammed, who Amnesty International revealed was in charge of the Nigerian military unit that executed more than 640 unarmed, former detainees.

Also, in separate incidents concerning the Indigenous People of Biafra (IPOB), the Nigerian Army has killed at least 36 – the real number is likely higher – people since December 2015 in an attempt to silence opposition and quell attempts by the group to gather publicly.

Of President Buhari’s 122 appointees, 77 are from the north and control many of the key ministries and positions of power. Distrust is already high in Nigeria and favouring Northerners for key appointments has only antagonized the issue. These appointments are also primarily Muslim in the north and Christian in the south, adding a religious aspect to long-held regional biases.

Of additional concern is President Buhari’s selective anti-corruption drive, which has focused almost exclusively on members of the opposition party, over-looking corruption amongst some of Buhari’s closest advisors. Politicizing his anti-corruption efforts has only reinforced hostility among southerners.

This is a logical first step in making a demonstrable, sustained commitment to inclusive democracy, with distributed power in Nigeria. Until President Buhari establishes a track record of working towards inclusion, we ask the State Department to refrain from selling warplanes and other military equipment to the country.

The State Department should urge President Buhari to form a government that represents the diversity of its citizens and allows dissenting voices to be heard. Democracy can thrive only if people are free to assemble, to express their beliefs, and voice their concerns.