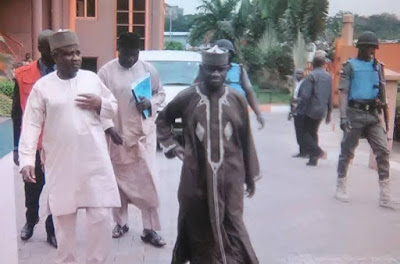 Justice A. S. Umar of the FCT High Court sitting in Maitama has granted bail to a former Chief of Naval Staff, Usman Jibrin, and two others who are currently standing trial for an offence bordering on criminal conspiracy brought against them by the EFCC. Others are retired rear admirals, Bala Mshelia, Sheu Ahmadu and a company, Harbour Bay International Limited.
According to the antigraft agency, the accused persons while in office, bought a house worth N600million from the account of Naval Engineering Services without the said purchase contract being captured in the budget.Investigations by the EFCC reportedly showed that the documentation for transfer of ownership of the property was done such that a private company owned by the family of the first defendant (Vice Admiral Jubrin) became the buyer.At the hearing of their bail application yesterday, the presiding judge granted the accused persons bail in the sum of N100 million each with two sureties each in like sum. One of sureties must not be below salary grade level 16.The sureties must have landed properties within the jurisdiction of the court which must be verified by the registrar of the court and the EFCC. They are to be remanded in prison until they fulfill all their bail conditions. Commencement of their trial has been slated for November 14th and 15th.