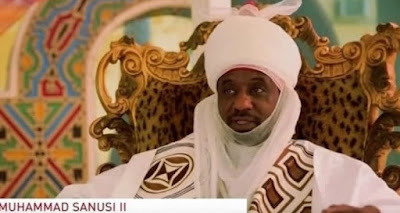 The emir, who is a former governor of the Central Bank of Nigeria (CBN), urged the rich to support the poor to alleviate their suffering.

He added that Nigerians, irrespective of religious beliefs and political inclinations, should continue to pray for economic growth.

He also urged the people of Kano to remain law-abiding and be their brothers’ keepers, irrespective of religion or ethnic background.

Sanusi urged the state government to help the people to acquire skills that would make them self-reliant.

Acting Governor Hafiz Abubakar, a professor, said paying workers’ salary was not a privilege but an obligation, which the state had continued to meet.

He pointed out that the economic crunch had made it difficult for no fewer than 28 of the 36 states to pay workers.

He called on the people to continue to pray for Nigeria’s peace, unity and progress.

The Emir’s advice came on a day Catholic Bishop Rev. Hassan Kukah told the government to stop blaming Nigeria’s woes on past governments.

Rev. Kukah, who spoke at the Catholic Bishops Conference Dinner Night at the International Event Centre (DOME) in Akure, the Ondo State capital urged the President to stop blaming the economic woes on his predecessor, Dr. Goodluck Jonathan.

He advised Buhari to dissipate his energies on how to get the economy back on track, saying that the Jonathan administration left some enviable landmarks.

In a chat with reporters, the cleric said: “The previous government did not only do bad things; he did a lot of good things.

“We did not vote a government to complain about yesterday, if we wanted yesterday the new government would not be there. It is really about taking responsibility.

“No matter how much you praise or abuse Jonathan, he is not the President of Nigeria (now). I think people must understand that you took power to solve problems not to agonise.

“As the head of a family, no matter how bad things are: no food in the house; you as a father cannot enter the house crying.

“It is the question of developing the mechanism; you can’t solve the problem; even my best friends in APC (All Progressives Congress) now realise that nobody can sing the song about Jonathan being responsible for the problems we are in.

“We are not asking you to change the whole world; Jonathan created problems; but we are now riding a train between Abuja and Kaduna now; the train was not there before.

But the Presidency declined to react to Kukah’s defence of the Jonathan administration.

“After reviewing what the bishop said, we decided that we should just allow it. We felt that as an individual, Bishop Kukah is entitled to his own views,” a Presidency source told The Nation last night.

Ondo State Governor Olusegun Mimiko, who was at the event restated the need to diversify the economy.

It should call in the experts, the Emir of Kano, Mallam Muhammad Sanusi II, advised during the traditional Sallah Durbar (Hawan Nasarawa) at the Government House, Kano.

In his view, consulting the experts will help in resolving the crisis and reducing the hardship Nigerians are facing.

The government is coincidentally, having a retreat on the economy today in Abuja.

Efforts to arrest the naira’s losses against other currencies seem not to be working. It  exchanged at over N400 to the dollar last week in the parallel market.