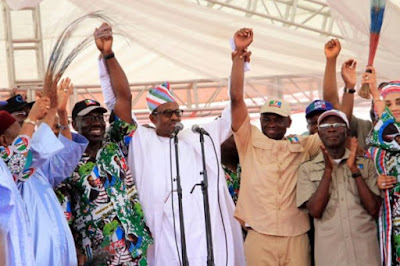 The people of Edo  have  successfully conclude the state gubernatorial election, which saw APC winner.

According to President’s spokesman Femi Adesina said in a statement in Abuja on Thursday that Buhari in a telephone call to Governor Adams Oshiohmole of Edo, noted with delight the victory of the All Progressives Congress (APC.

He said Buhari commended the well-articulated campaign programme of APC in the state, the doggedness of the governor, governor-elect and the party members in going round the state to reach the people with records of good governance.

The president said the outcome of the election clearly reflected the mood of the people to sustain the pedigree of responsiveness, forthrightness and diligence that Oshiomhole brought into the service of his people, Adesina explained.

“The victory is good for democracy, for Nigeria and for the people of Edo,” he quoted the president as saying.

He said the president described the victory as well deserved considering that the campaign train, which he (Buhari) joined, worked hard to sell its people-centred manifesto.