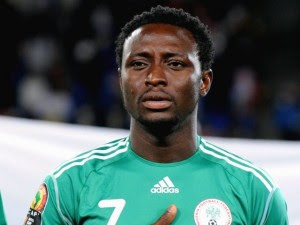 The Nigeria international is back to his best following a string of fine performances for AIK in the Allsvenskan, including his brace against Elfsborg on Sunday which took his tally to four goals from five matches.

Swedish-based striker, Chinedu Obasi, has said he would not extend his contract with AIK at the end of this season, and has targeted a return to one of the big leagues in Europe.

“The secret behind my form is hard work and dedication, and God of course,” Obasi told allnigeriasoccer.com.
“I am looking forward to move to Europe at the end of my contract but let me finish writing my name in the league.

“I am focused here for now and taking each game at a time.”
Obasi was a household name at another Scandinavian team, Lyn Oslo, where he played alongside his good friend, Mikel Obi, before switching to Hoffenheim and Schalke 04 in the German Bundesliga.