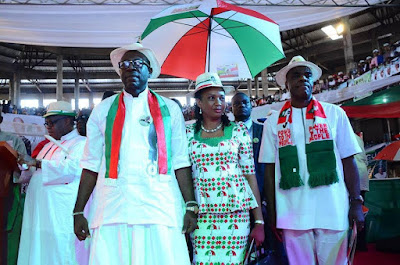 PDP has described as shocking and bizarre, the calls by the Police and DSS for INEC to postpone the Saturday September 10th governorship election in Edo state due to security reasons. The police and DSS in a joint press statement yesterday said intelligence available to them suggests that there might be an attack in some states in Nigeria during the Sallah holidays, especially in Edo state

. Read the statement from PDP below….

Our attention has been drawn to the shocking breaking news of the advise by the DSS and the Police to the Independent National Electoral Commission (INEC) to postpone the Saturday, September 10, 2016 Gubernatorial Election in Edo State on excuse of insurgency alert. We are taken aback on this advise coming a day after the President and Commander-in-Chief of the Armed Forces of the Federal Republic of Nigeria, Muhammadu Buhari was present at the Mega Rally of its Party, the APC in Benin City which was concluded without any hitch. “It is on record that INEC recently conducted a ‘hitch free’ Senatorial By-Election in Borno State which is a high-point of insurgency in the Country but the Security Agencies saw no reason to call-off the Election. It is therefore lamentable to hear from these same security agencies that the Election cannot be held in a State where in less than 24 hours, the President and all the APC leaders and members had an uninterrupted Rally”.

We are calling on the President, Muhammadu Buhari to caution the security agencies and direct them to provide full security, and also to desist doing anything that will jeopardize this forthcoming Gubernatorial Election in Edo State. We are equally counting on INEC not to succumb to this false alarm by acting independently and holding election as scheduled. “We hope that this advice from the security agencies are not in concert with the APC of having seen the indices of loosing the Edo State Gubernatorial Election to the PDP”. Finally, the Party leadership led by Senator Ahmed Mohammed Makarfi, CON, call on our members, teeming supporters, other Edo voters and the international community to remain law-abiding while staying alert on this calculated attempt at scuttling our hard earned democracy.