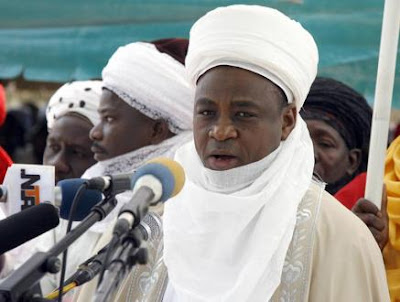 Nigerian Supreme Council for Islamic Affairs (NSCIA)President General added that some ‘’ bad eggs’’ had infiltrated the Fulani herdsmen and challenged security agencies to be more proactive to unravel the criminals masquerading as herdsmen to scuttle Nigeria’s unity.

Sultan of Sokoto spoke yesterday, in his Eid-El-Kabir message to the Nigerian Muslim Ummah, said:’’ All those so-called Fulani herdsmen moving with guns, causing  violence, fighting with farmers are not Nigerians.”

The Sultan said the gun-totting herdsmen, were foreigners coming into Nigeria to cause a breach of the peace.

The herdsmen and farmers clash and the herdsmen’s attack on communities have led to the killin of many people. It has created tension in many communities across the country. The Ekiti State government has also enacted a law regulating the herdsmen’s activities. The law prescribes six months jailterm for herdsman that flouts the law.

‘’ Nigeria would continue to lag behind if there is no peace and unity.

‘’Our diversity should be our strength and God has not made a mistake by creating us with diverse differences.’’

On the ongoing ‘’ hardship’’ in the country, the Sultan appealed to Nigerians to go back to the farms.

He also urged Nigerians to learn to be more productive, rather than solely waiting for the government to provide all their needs.

Abubakar also commended the three tiers of government for their ongoing efforts to provide succour to Nigerians.

He also stressed the need for leaders to continue to be just to all Nigerians, irrespective of political differences.

‘’ They are therefore terrorists and should be treated as such by the Nigerian security agencies.

‘’ The Nigerian herdsmen are very peace-loving and law abiding.’’

However, the Sultan, who acknowledged that, there were problems between the Fulani herdsmen and farmers, stressed the need to embrace dialogue as the only option to resolve it.

He reiterated the need for Nigerians to live peacefully with each other, irrespective of religious or ethnic differences. He emphasized the importance of sustainable peace, if the country was to fully develop.