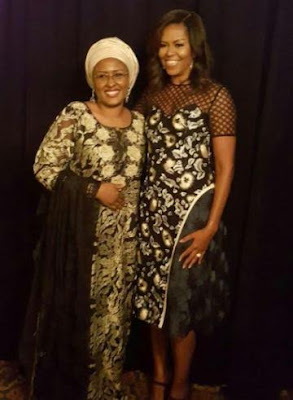 Reno Omokri says allegations that Aisha Buhari’s picture with Michelle Obama was photoshopped is false. He stated that he doesn’t like President Buhari nor believes in him but that doesn’t stop him from praying for him. He wrote;

“The allegation that Aisha Buhari photoshopped her picture with Michelle Obama is false. Even if you don’t like President Buhari, don’t take it out on his wife or family. I’ve been at these functions. People line up to take pictures with the alpha who maintains the same pose. I don’t like President Muhammadu Buhari. I don’t believe him.
I will never ever vote for him. Yet, I mention him by name everyday in prayer. Not some days. EVERYDAY. I do this because I fear God. I will criticize him. But if I do criticize him, it will be because of something he is guilty of not due to something he and his wife are innocent of. Whether you like it or not, Buhari is the Lord’s anointed, for now. If you are going to move against the Lord’s anointed, better have truth on your side or you end up like Rechab and Baanah!