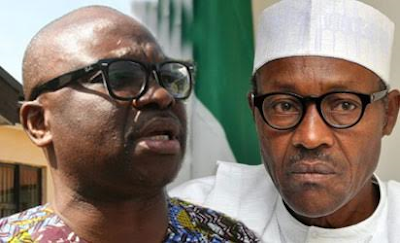 Ekiti State Governor, Ayo Fayose has said that Nigerians were suffering under the All Progressives Congress (APC) government of President Mohammadu Buhari because “the country is in the hands of wrong managers who do not know what to do and out of nepotism, not ready to be assisted by those who know.” In a statement released today by his Special Assistant on Public Communications and New Media, Lere Olayinka, Fayose said Nigeria was experiencing the worst form of nepotism in the history of government in the country
.


“Nepotism is the reason our President discarded competent people in his party that should be running the government with him and opted for his relatives, friends, in-laws and very close associates. The only qualification to hold key positions in the Presidency is to know a certain nephew of the President or be a member of his family, that’s nepotism and what nepotism breeds is incompetence. The most influential person in the Presidency today is said to be one Mamman Daura, who is a nephew of the President. Personal Assistant to President Buhari is said to be the son of Mamman Daura while the State Chief of Protocol said to be married to Mamman Daura’s daughter. It is also the height of nepotism that apart from just two, all security chiefs and heads of all the paramilitary agencies in Nigeria, as well as all the political-heads overseeing all the military and paramilitary arms and agencies are from the North of Nigeria,” Fayose said.

He added that President Buhari was obviously being tormented by fear of the unknown which he described as the main reason people take to nepotism.xxxx

“As a leader, you don’t need to fear anything. But the moment a leader peeps into the future, realising that his lack of capacity could have consequential effects on him, such a leader will definitely resort to nepotism to protect himself. Also, the moment a government is unable to guarantee the existence of the people, it must resort to nepotism to protect itself and that is exactly what is being witnessed in Nigeria, especially with the lopsided appointments of security chiefs and key functionaries of the Federal Government,” he said.

While lamenting the poor state of the economy, Fayose said;

“Most of those people that aided the emergence of President Buhari must be having a rethink now, but it is too late! Interestingly, political affiliation has nothing to do with hunger, poverty and lack. Exchange rate was less than N200 to $1 when President Buhari took over power, as at today, it has gone beyond N400 to $1 and Naira is still undergoing a free fall. One bag of rice was less than N8, 000 as at May 2016, it is now N20, 000. Kerosene is now beyond the reach of the masses. Nigerians voted for change because the APC promised them solutions to the country’s problems, but all we hear every day from the APC Federal Government are complaints upon complaints as if Nigerians elected a government of complaints. Obviously, the APC government has failed Nigerians and the President has resorted to putting his immediate family members and close associates in key government positions to protect himself from the fear of the unknown that has enveloped him.”