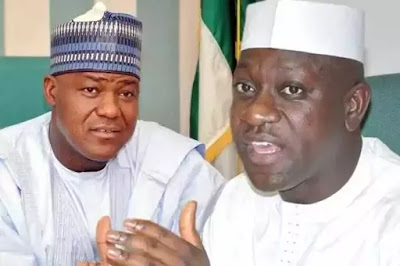 Abdulmumin Jibrin the former chairman of the House of Representatives committee on appropriation, , was prevented from seeing President Muhammadu Buhari over his budget padding allegations because he failed to follow protocol, the presidency has said.

Recall that Jibrin, who had accused Yakubu Dogara and some principal officers of the House of Representatives of padding, had alleged that two governors and three former members of the House were “blocking” him from meeting the president to state his own side of the story.

But senior special assistant to the president, Abdulrahman Kawu-Sumaila, has dismissed Jibrin’s claims that he was prevented from seeing the president, the Sun reports. Sumaila said as a lawmaker, Jibrin should know the “protocol” on how to see the president, even as he said Jibrin had never approached him to facilitate a meeting with Buhari.

He said: “The way he has been going about this issue is unfortunate. He is dragging the names of innocent people into it. He has not approached me that he wants to see the President. If he makes a request, I will facilitate it for him. He knows the protocol.

” Meanwhile, the senior special assistant to the president on National Assembly Matters (Senate), Senator Ita Enang has said the budget as signed by President Buhari was not “padded” to the best of their knowledge, adding that the term “padding” was alien to legislative practice. Speaking after a meeting with the leadership of the All Progressives Congress (APC) at the party’s national secretariat, Abuja on Tuesday, August 9, Enang told journalists after the over three hours meeting that the party was looking into the issue to get to its root, adding that they had been enjoined not to make public comments on the details.