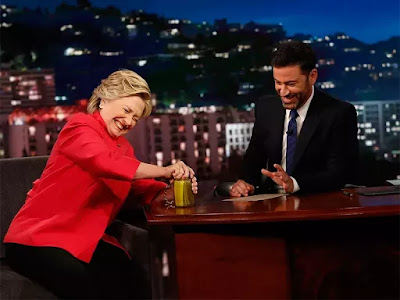 The Democratic presidential nominee Hillary Clinton was question recently on her well-being by questioning her “brain injuries” using conspiracy theories as evidence.

The Republican party  Member Healthers believe that  Hillary is old , so she can’t  lead America, though she is 68yrs  but she will not be the oldest in America history because  Ronald Reagan was 69yrs old when he became united states President.

But on Monday’s episode of Jimmy Kimmel Live, the Democratic presidential nominee put the rumors to rest by proving she’s in deed in good health to serve as the future POTUS.

To further prove her strength, Kimmel surprised the grandmother of two with a dare to open a sealed jar of pickles

“It absolutely makes no sense, I don’t go around questioning Donald Trump’s health,” she concluded. “I’m out here talking about the issues and I also answer questions if I’m alive.