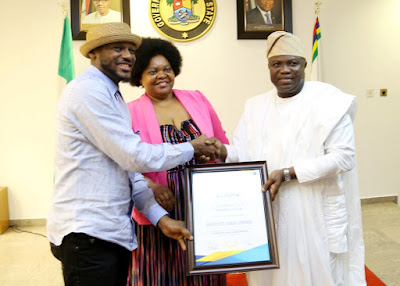 Nigeria Music icon, Tuface Idibia has been awarded by the Executive Governor of Lagos State, Mr. Akinwunmi Ambode with a certificate of Appreciation, for his selfless support to the growth of Africa’s biggest awards, AFRIMA ( All African Music Award ).

2baba recently got conferred with an honorary title in Edo state for his selfless service to the youths.He was celebrated for his long standing commitment to the success of AFRIMA since its inception in 2014 but most especially, he displayed by hosting the maiden edition of the awards

Tuface Idibia along with other AFRIMA delegates visited the governor to issue him a certificate of hosting as plans kick off for the 2016 edition of the notable event. 2Baba also used the opportunity to formally invite the governor for the upcoming Buckwyld ‘n’ Breathless: The Disruption concert which is set to hold on the 3rd of September, 2016.