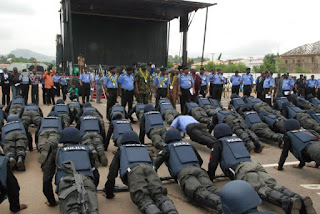 The Police Service Commission (PSC) has informed the public  that the second phase of the 10,000 Nigeria police force recruitment is about to commence.

The commission explained that the warning is imperative following information that fraudsters opened facebook account with the name of the Chairman of the Commission, Mike Okiro to defraud people.

In a statement from  Head of Press and Public Relations, Ikechukwu Ani stated that “The Commission recently concluded the State screening and would in no distant time begin the second phase of the process leading to the recruitment. “Successful applicants from the state screening will soon be invited for the next level of the process.”

The police service commission  Head of Press and Public Relations, Ikechukwu Ani warning against payment of money to fraudsters, the Commission said: “Fraudsters have opened a fake Facebook account with the name of the Chairman of the Police Service Commission, Mike Okiro

He also noted that the Commission will resist any pressure to undermine or compromise the integrity of the process and the outcome.
He also assured Nigerians that the fraudsters would soon be rounded up as the police is already after them and will soon apprehend the culprits.

Okiro toldthe general public: “Anybody paying for any assistance to be recruited will definitely be disappointed. Security operatives are on the alert to arrest those giving and the others that are receiving. “If they ask you to bring money, whether the fraudsters, our staff or police men, report to us and we will arrest and prosecute the person or persons.”

The entire process of recruitment would be transparent. He then went on to advise unsuspecting applicants to beware of the fraudsters that might want to take advantage of their desperation to get into the police force. he said”