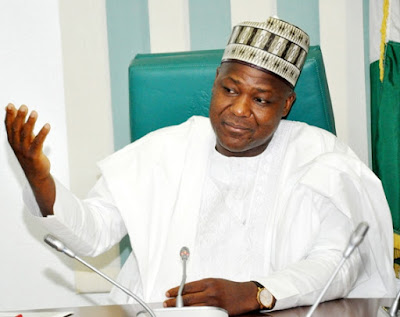 Embattled Speaker Yakubu Dogara  and four other principal officers of the House were involved in budget padding, has already secured the signatures of  262 of the  360 members.is in desperate search for  a minimum of additional  28 members of the House to retain his leadership of the house of representative.

Speaker Yakubu Dogara , already signed a register to keep track of those backing him in the biggest threat yet to his position since he was elected in an acrimonious process in June last year.

The breakdown of the 98 Reps who are yet to sign the register:

Dogara challenge is having borders on poor support base for his Deputy, Yusuff Lasun in the South- West. Out of the 65 Representatives from the South-West, only about 30-36 signed the register. Whereas, Dogara was able to secure 95 per cent signatures of members from the North-East The nation report”.

Speaker Yakubu Dogara and his loyalists are said to have been reaching out to as many Reps as possible in an attempt to ensure that  Dogara is not brought down by the Jibrin allegations.
Reps are being wooed to back the present leadership.

“At a meeting of pro-Dogara loyalists during the week, the Deputy Speaker was faulted for not embracing his colleagues from the South- West after the House has reconciled.
“Although Lasun gave the details of his rapprochement with Representatives from the South-West, members were not convinced at all.

Pressure on the Deputy Speaker to wield influence on his colleagues from his geopolitical zone to back Dogara.

“Members are eager to see whether Gbajabiamila will pay Jibrin back in his own coin or stand by Dogara based on privileged information at his disposal.”