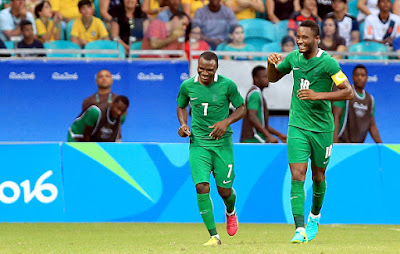 Nigeria’s Olympic Eagles have qualified for the semi-finals of the men’s football event of the Rio Olympics after defeating Denmark 2-0 on Saturday in Salvador.

Goals from skipper Mikel Obi and Aminu Umar sealed the win for Nigeria.

In the 20th minute Nigeria came close to doubling their lead but Ezekiel’s strike went inches over the bar.

Denmark almost drew level on 25 minutes following a looping header but Daniel palmed away for a corner.

A minute later Daniel saved a point-blank shot after a Denmark player was left unmarked.

In the 38th minute, Stanley Amuzie sent in a low drive which deflected off for a corner.

On the stroke of half time Daniel tipped a goal-bound header over the bar.

Aminu Umar put the Dream Team ahead by two goals with his 59th minute header.

With this win, the Dream Team cruises to the semifinals to face Germany next Wednesday. 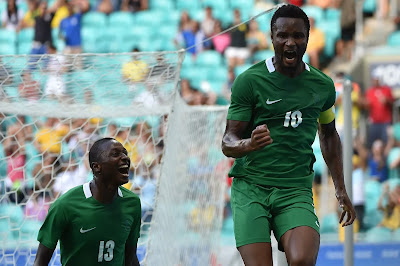