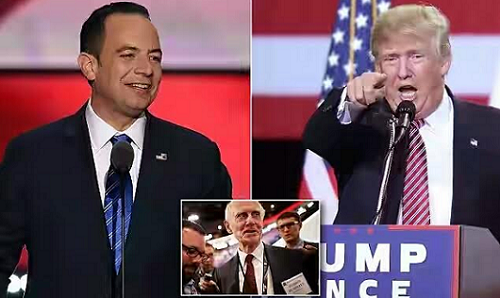 More than 70 frustrated Republicans including elected officials and staffers have signed an open letter urging RNC chairman Reince Preibus to stop funding Donald Trump’s campaign.As Trump continues to slip in the polls, the signatories are asking for the party to instead focus resources on maintaining the GOP’s majority in the House and Senate.The letter, obtained by Politico, says Trump’s chances of winning in November are ‘evaporating day by day’ and that his ‘recklessness’ and ‘incompetence’ risks handing the election to Hillary Clinton by a landslide.It lists a string of problems with Trump’s campaign, including his many controversial remarks, his refusal to release tax returns and his claim that he may not uphold NATO treaty requirements.
‘We believe that Donald Trump’s divisiveness, recklessness, incompetence, and record-breaking unpopularity risk turning this election into a Democratic landslide, and only the immediate shift of all available RNC resources to vulnerable Senate and House races will prevent the GOP from drowning with a Trump-emblazoned anchor around its neck,’ says a draft form of the letter.This should not be a difficult decision, as Donald Trump’s chances of being elected president are evaporating by the day.’It adds Trump’s actions, such as attacking Gold Star families, praising dictators and calling on Russia to find Clinton’s missing emails, have ‘alienated millions of voters of all parties.’Those recent outrages have built on his campaign of anger and exclusion, during which he has mocked and offended millions of voters, including the disabled, women, Muslims, immigrants, and minorities,’ the letter says.