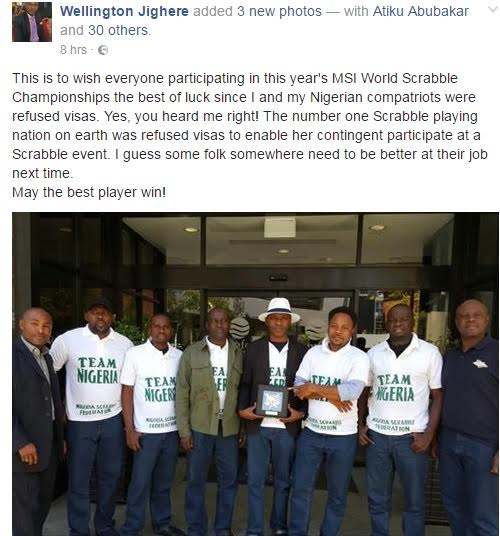 Wellington Jighere, made Nigeria Proud by winning the 2015 World Scrabble Championships in Perth, Australia.
He beat 129 competitors to win the World English-language Scrabble Players’ Association Championship, defeating Englishman Lewis MacKay with four straight wins in the best-of-seven final round. Read it here.
This was after he won the 3rd World’s best at the games in 2007, and the Africa Scrabble Championship in 2008.
He broke the news this morning via his Facebook Page. The World Champion said:
This is to wish everyone participating in this year’s MSI World Scrabble Championships the best of luck since I and my Nigerian compatriots were refused visas. Yes, you heard me right! The number one Scrabble playing nation on earth was refused visas to enable her contingent participate at a Scrabble event. I guess some folk somewhere need to be better at their job next time.
May the best player win!
Advertisements
news