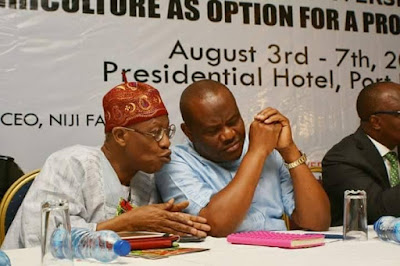 President Buhari says despite the oil boom a few years ago, the past administration failed to save for the rainy day. According to The Nation, President Buhari said this while speaking at the opening of the 12th All Nigeria Editors’ Conference (ANEC) 2016 in Rivers state yesterday August 4th. He was represented by the Minister of Information and Culture, Lai Mohammed.

“Nigeria has nothing to rely on to cushion the effects of the lost earnings. Many other oil producing countries and fellow Organisation of Petroleum Exporting Countries (OPEC) members are faring better, because they saved for the rainy day. Saudi Arabia, with about one fifth of Nigeria’s population, has in foreign reserves about $600 billion, which is 23 times what Nigeria has in foreign reserves. United Arab Emirates, with less than 10 million people, has $75 billion in foreign reserves. Qatar, with 2.4 million people, has $36 billion in foreign reserves. Even Angola, with just 24 million people, has about $25 billion dollars in foreign reserves. Here in Nigeria, with oil selling consistently for over $100 a barrel for many years, we simply failed to save for the rainy day, with the result that a country with a population of over 170 million today has just $26 billion in foreign reserves. To compound this, the fall in the price of crude oil is having a ripple effect: the scarcity of forex, which has resulted from the oil price crash, means that industries are struggling to get forex to import raw materials and machinery. With falling imports, the Customs Service, which is another source of revenue, is collecting less duties. Taxation is also affected, as industries with no forex to import can neither employ more people nor produce more goods. Then, Nigeria has had to fight an existential battle to root out Boko Haram in the Northeast”he said