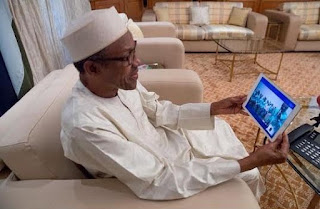 President Muhammadu Buhari  assured Nigerians  on tuesday that his working hard to resolve the power problem facing the country.

President Buhari also noted that the problem is also affecting other neighboring countries who are depending on Nigeria for their power supply.This statement was made while  receiving the Togolese President, Faure Gnassingbe, at the Presidential Villa, Abuja yesterday.

“If ‎we improve power which means our productivity can be competitive and God’s willing we are going to achieve our objectives.

President Buhari also said that they discussed the unfortunate incidents in South Sudan, Burundi during the closed door meeting.

The Nation report that, “They say seeing is believing, you can see the efforts private investors are making. We are also building pipelines but it is not as formidable as what Dangote is doing, we are improving on it. We also have the LNG that is helping us to liquidify the gas and then turn it into gas with modern technology and modern technology is making it flexible.

“It is an agonising situation, several citizens are living under primitive conditions, we hope at the AU meeting we will be able to stabilise‎ the situation in South Sudan and Burundi with the efforts being made.” He stated

The Togolese President express that is quite happy with Dangote investment which brought him to Lagos State.

“Because we have been talking of Socio-economic integration and promoting trade among African countries. If you want to promote trade you have investors that are very competitive and will contribute to reduce import from non-African countries.

“I was told the gas pipeline that will be built will be buried under the sea‎ to make it. It means if you want to promote blue economy, our ocean needs to be very safe. We need security,” he said.