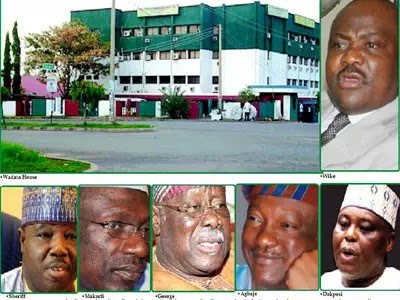 The policemen and other security operatives moved to the sharks stadium at the old Port Harcourt Township, popularly called Town, as early as 4 a.m. today, to prevent the breakdown of law and order.

The Sharks Stadium, Port Harcourt, Rivers State venue of today’s National Convention of the Peoples Democratic Party (PDP) has been sealed off by a combined team of security personnel from the police and Department of State Services (DSS).

Sharks stadium was ready last night, while the Outside Broadcasting (OB) vans of the Africa Independent Television (AIT), Channels Television and the Nigerian Television Authority (NTA) were mounted Tuesday evening and early this morning, but the security men asked the teams to quickly vacate the stadium, while journalists who got to the venue as early as 6 a.m., were ordered to immediately leave the stadium.

Francis Mobolaji Odesanya,Rivers Commissioner of Police said in a telephone call to the nation that : “We are obeying court order.”

The sharks stadium at 6 a.m. was prevented at the main gate by fully-armed and stern-looking policemen, DSS operatives and other security personnel from gaining entrance into the venue.

Journalists, politicians and other persons who had already entered the stadium were ordered out, with more journalists and PDP members still milling around the stadium, as at press time, in case of further developments.