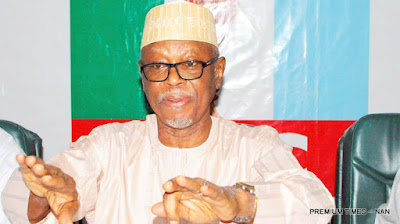 The National Chairman of the All Progressives Congress (APC), John Oyegun,told News Men  in Abuja on Thursday that Peoples Democratic Party (PDP), brought Nigeria to its present situation after 16 years of locust, lacks the moral basis and the credibility to comment on the country’s economy or condemn a government that is working hard to clear the mess left behind by the disgraced former ruling party,

The Statement was release by his Media Office in Abuja,he said “it was stomach-churning and downright immoral for the ruinous PDP, which has yet to show remorse or exhibit any form of penitence for presiding over the mindless looting of the nation’s treasury, to now put itself up as the saviour of Nigerians.”

According to the Chairman, Nigerians who were now bearing the brunt of the economy that was mindlessly mismanaged by the PDP, cannot forget in a hurry that some $15 billion – which is about half of the nation’s foreign reserves at the end of the tenure of the PDP-led Federal Government – was mismanaged under the guise of equipping the military, when in reality the funds were largely salted away by PDP fat cats.

Premuin time report that,Nigerians were also not unaware that just before the last general elections, some $2.1 billion was shared out to just a few PDP faithful, either to be used for praying against Boko Haram or for phantom communication purposes, when in reality the soldiers whom the money was meant to equip were dying in droves.

John Oyegun lited someof the corruption under PDP government which never differentiated between the party’s finances and the Nigerian treasury, to include:
The $20 billion in oil proceeds that was never paid into the Federation Account

The N33 trillion in national oil revenue that was not accounted for, considering that while the nation earned in excess of N56 trillion over five years under the last Administration, the total budget for those years amounted to about N23 trillion

The $47 million that was distributed to a few individuals just to oil the election process before the last polls.

Mr. Oyegun said it clear now because the farmer has not checkmated the thief, he (thief) has become so emboldened that he is now making a move to even cage the farmer from whom he has been stealing,”

“Nigeria is currently in ICU (Intensive Care Unit), after it was rescued from PDP. Yet, the same PDP has the audacity to constantly pillory the ‘doctors’ trying to save the ‘patient’.”

Oyegun appealed to Nigerians not to succumb to the antics of the PDP but to continue to support the efforts of the present Administration, which is working day and night to ease the impact of the tough economic situation on the
citizens.