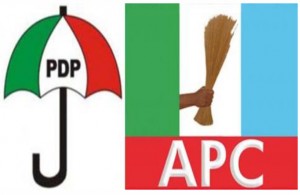 The former Chairman of the Peoples Democratic Party (PDP) in ward 11,said he decamp own to the fact that the people of the area have benefited from the APC led government.

Chief Sunday Edehor, said i don’t want people to see me as ingratitude,i have been in the PDP since 1998 but recently realize he and his supporters have been deceiving themselves by remaining in the party.

Accordly to The nation report,“Just take a drive around Etsako area you, you will see the roads, schools Oshiomhole has built for us, so don’t you think our people will stone some of us if we continue to remain in PDP? I don’t want to risk my life because they will say I am an enemy of progress.

“So I will be a mad man to remain in PDP. And let me tell you, there is no more PDP in the entire three Local Governments in Etsako. It will not make sense to remain at all, because both the people and God will even punish us so that is why we decided to leave for APC. It makes more sense for us to join APC so that the developmental projects Oshiomhole that has started in Etsako land will continue

APC is giving us Deputy governor so how do you expect us to remain in PDP.“We have been managing over the years abusing the State Governor, Adams Oshiomhole despite the fact that he is our son but we are in PDP, but it has come to a stage when we decided to think about what is good for our people. PDP since 1999 never gave Edo North governorship not to think of giving it to Etsako.