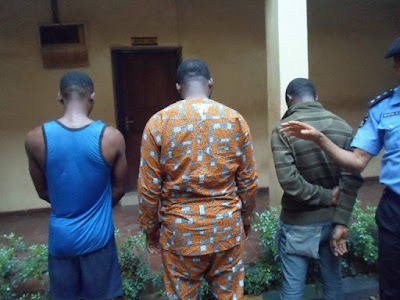 The quest for justice for Uzoamaka, the minor that was tortured and dehumanized by a combination of public officers and policemen in Uburu, Ebonyi state, has begun to bear positive fruits.
According to Linus Abaa Okorie who has been ardently following 15 year old Uzoamaka’s case, the girl who has stripped naked and severely flogged on camera, the 3 policemen who were involved in the dastardly act have been indicted after an orderly room trial. A recommendation for dismissal for their part in the case has also been recommended. Read his post after the cut…

The quest for justice for Uzoamaka, the minor that was tortured and dehumanized by a combination of public officers and policemen in Uburu, Ebonyi state, has begun to bear positive fruits. …

Sources have confirmed that the three policemen indicted in the crime have been recommended for dismissal by the Orderly Room trial that held yesterday at the state command headquarters. The Command Police Public Relations Officer (PPRO) is expected to issue a statement announcing the decision any time from now.

With this development, the affected officers will now be expected to join three other suspects Ogbonnaya Ene Odii (Coordinator Ohaozara Development Centre), Enekwachi Ene Odii and Martins to face prosecution in court on charges arising from the crime.

The public now looks forward to a similarly expeditious conclusion of police investigations so that all suspects can be arraigned appropriately.

One must commend the Ebonyi state Commissioner of Police, Peace Ibekwe Abdallah and her team of officers and men, for their professional rectitude in the administration and management of this case so far. I should also specially commend and appreciate the Ebonyi state governor, Engr. David Umahi Nweze, for providing the unfettered conducive environment for the police to work and achieve these monumental results. He had in a public statement roundly condemned the dastardly act and insisted that justice must be done accordingly, irrespective of the status of any suspect.

Our call for steadfastness and conscious alert remains with the public until this case is finally disposed of in accordance with our laws.

Finally, let me reiterate my earlier call on the government and people of Ebonyi state to take advantage of little Uzoamaka’s case and the publicity surrounding it to domesticate the VIOLENCE AGAINST PERSONS PROHIBITION ACT (‪#‎VAPPA‬). This will provide a permanent protection for similar incidents and deter future abuses. 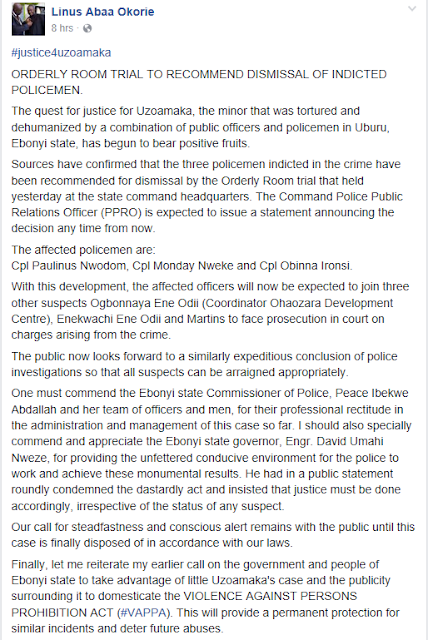