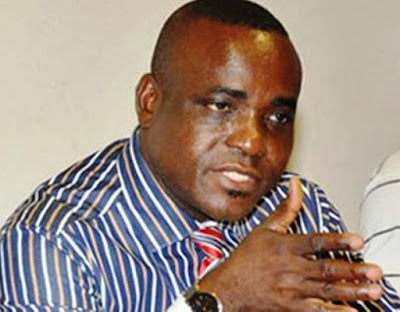 Senior Special Assistant to the President on National Assembly Matters (Senate), Senator Ita Enang was at the National Secretariat of APC to brief the leadership of the party on allegations of padding of the 2016 budget leveled against Speaker Yakubu Dogara and 13 other lawmakers by sacked chairman of the House committee on Approporiation, Abdulmumin Jibrin.

Speaking to newsmen after the meeting, Enang said contrary to Jibrin’s claim, there is no word as padding in Nigeria’s legislative dictionary.

“I am here on the invitation of the leadership of the APC with my colleague to bring answers to issues raised by the party on the 2016 appropriation and we have been with the party for a little over three hours.

We have given explanations to them on every issue and told them that there was nothing, to our knowledge, like padding of the budget. The budget as assented to by Mr President is the budget as passed by the national assembly and that is the budget being executed. But as of now, the party is handling it as a domestic issue, and all of us are enjoined not to make public comment on the details because the matter is still under consideration. So, that is what we will want to say for now.

Therefore, any word which is yet to crystallize in legislative lexicon, you cannot hear us mention it.”he said