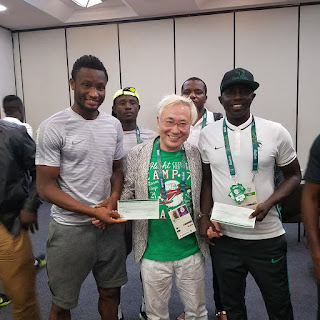 According to former goalkeeper Peterside Idah for a post on his Twitter handle before the match,complaining that NFF  wanted to ‘hijack’ the $390,000 donation to the team by Japanese plastic surgeon, Dr. Katsuya Takasu.

His statement on twitter page was quote,  “More trouble in the dream team camp….the money from the Japanese man to the dream team has been hijacked by the NFA .they want to use.

The NFF replied Peterside Idah”“His message was a lie, an atrocious false alarm before an important match. I had exchanged correspondence with the Honourable Minister on the issue of the donation and we agreed that there was need for caution. The Minister said to me that he read the donation in the papers and had expressed serious concern. I also received a mail from the NFF Integrity Officer who expressed very serious concern with this kind of donation,” NFF President Amaju Pinnick said in a press release by the body.
Hope the money is given to the boys for their good work well done so as to encourage more from them.

below is the letter from Dr. Katsuya Takasu 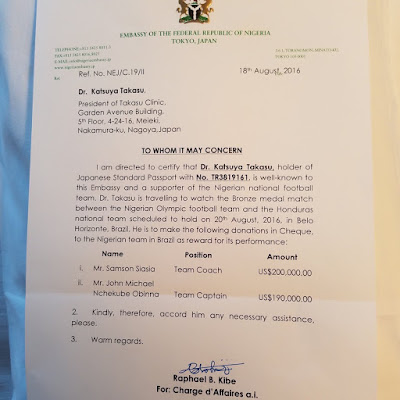