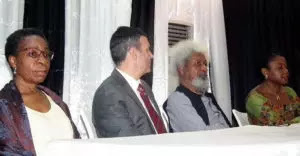 He denounced the reports linking him with an international intervention group, which has been formed, and on behalf of which he was reported to have met with the President.

The scholar said he has taken a stand keep secret the details of his recent visit to President Muhammadu Buhari at the State House in Abuja,said it  yesterday at a news conference by the Wole Soyinka Foundation to announce the foundation’s partnership with a Lebanese institute to conduct an intensive course for international students, Soyinka said: “I had a meeting in London at the House of Lords, and the meeting was not about the main subject that took me to Aso Rock, which was among other things, the problem we have in the Delta. The meeting was reported in the media, and it was badly distorted.”

He said: “How can a group which does even exist be holding a meeting with President Buhari? How can I, who just happened to be meeting with the President, say that both entities have met when one of them does not exist? In fact, I have taken a decision not to speak about the Delta situation publicly because I cannot spend my time correcting a falsehood I am not responsible for.

“I was approached personally, and I have been responding personally to some of these groups just as I did when President Jonathan was in power and the Movement for the Emancipation of Niger Delta (MEND) was the umbrella group of the insurgents. At the moment, they feel that the government of President Buhari is not seriously responding to their outreach. I am not part of any international group, but I hope one gets formed and is active very soon.”

The Wole Soyinka Foundation was taking steps towards exposing youthful minds to other cultures and civilisations through the Study Abroad In Lebanon (SAIL) programme.
The SAIL programme is an initiative by CEDARS Institute, Notre Dame University, Lebanon, in conjunction with the Wole Soyinka Foundation. Four students have been nominated upon request from different institutions across the country. They will travel to Lebanon for the course.

Dr Habib Jafaar, a Lebanese businessman who organised the Nigerians’ participation in the programme, described it as an interactive course that would take the students through such historical places like the Crusader Castle and Ba’albek in Lebanon.