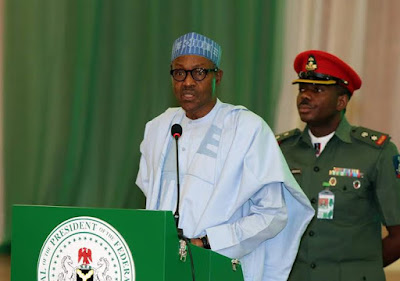 President Buhari reacted yesterday to the budget padding row in the House of Representatives, promising to probe the allegation and other related cases over the years.

Accordly to the Attorney-General of the Federation and Minister of Justice Mallam Abubakar Malami (SAN) said the government would “take action” based on the probe outcome.The probe may be extended to the administrations of former President Olusegun Obasanjo, the late President Umaru Yar’Adua and former President Goodluck Jonathan.

The Attorney-General of the Federation said the administration of President Muhammadu Buhari would probe executive and legislative conspiracy on constituency projects.

He also said that government’s action on padding would lead to the blocking of fraudulent leakages. “We will investigate the executive and legislative conspiracy as it relates to constituency projects with a view to measuring the art of execution of the padded projects over the years.

“In so doing, we will learn our lessons in the budget and its implementation as a law with the aim to prosecute infractions and block leakages inherent in the padding process.

“Action must naturally be taken in the interest of the nation for efficient utilisation of our commonwealth and blocking of fraudulent leakages.”

Abdulmumin Jibrin yesterday lashed out at Speaker Yakubu Dogara for saying that padding is not an offence.Will today be interact by the Special Investigation Panel (SIP) of the Police.

Abdulmumin Jibrin is expected to present more documents to the panel and begin his interaction with the five-man team.

On Jibrin Tweeter handle last night said only 13 members of the House are on trial for padding, not all the 360 members.

He said: “It has once again become necessary for me to make some statements, clarifications and further revelations.

“As you are aware, my party(APC) has intervened in the current crisis following allegations of corruption, embezzlement and abuse of office leveled against Speaker Yakubu Dogara, three principal officers and nine other members of which none had responded to any.

“As I said earlier, it is only the 13 members of the House that are on trial, not the House of Representatives as an institution.

“Surprisingly, they have resorted to using every tactics to narrow the allegations to only issue of padding, which in itself is a grievous offence, ignoring tens of other criminal allegations in my petition to the anti-corruption agencies.

“In doing so, they mischievously expanded the scope of the culpability to give an impression that the entire House, the Senate and even the Executive arm of government and some individuals outside the National Assembly are on trial.

“This is a wicked attempt to drag many institutions and individuals into the matter to neutralise the issue, spread fear and sell dummy that the entire country will go down if this matter is dealt with decisively, the biggest blackmail on the entire country I have ever seen.

“Nigerians should know that the whole agenda of this blackmail is  being coordinated by  two serving governors and three former members. I will give their names in due course. They have been running from pillar to post and I keep wondering what really are they afraid of.

“The meeting with the party went very well and in all honesty, they were very objective and showed understanding.

“I told the party that I will be part of any peaceful resolution except the criminal allegations I have raised against Dogara and 12 others.

“On that, I told the party there is no going back and further informed them that more revelations will be made once investigation commences.”

Alleging that there is a plan to assassinate him, Jibrin said: “I believe Speaker Dogara, the 12 others and some vested interest within and outside the House want to kill me. I no longer feel safe. I have carefully followed their desperation to suppress what will go down in history as the biggest corruption case in Nigeria.

“I have prepared myself for any eventuality. I have spoken to my mum and dad extensively during the weekend. I have prepared my family. I have handed over a handwritten note and documents to a popular Senior Advocate of Nigeria (SAN), a man of integrity and other persons that I believe will lay it bare even if they succeed in killing me.

After three days of careful observation and receiving information from very patriotic Nigerians, I discovered a grand plan by the group of two governors and three former (House) members designed to provide soft-landing for Dogara and 12 others, give them time to clean up the mess on their desk, destroy whatever evidence in their possession and reach, spread money across members to buy signature of vote of confidence.