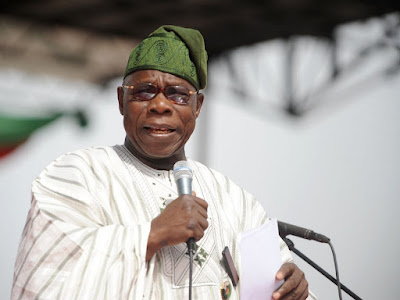 Ex president Olusegun Obasanjo said having announced his exit from partisan politics publicly, it is unthinkable and preposterous for anybody to contemplate that he would reverse himself and returned to a comatose PDP

says whoever believes I’ve return to PDP will doubt his mother’s gender, i left the party when it was still alive.

Obasanjo made this known to reporters in Abeokuta, the Ogun State capital, on Saturday in a release, ostensibly to dismiss media report purportedly linking him with a meeting of the Convention Committee of his former party at the Shehu Musa Yar’ Ardua Centre, Abuja last Friday.

He attended farmers’ event at the Shehu Musa Yar’adua Centre organused by the Commodities Association Stakeholders on “Zero Hunger Nigeria” and not for any PDP event.

“If I quit a party when it was alive and seemingly united, how could I go back to a now divided, factionalized party gasping for breath?

He noted that those behind the media report linking him with the PDP convention committee’s meeting were probably looking for ways to annoy and embarrass him, but assured that anybody hoping to drag him back to PDP for whatever reason would fail just “like any man serving a dead mice to a cat.”

The elder statesman explained that he had ordinarily attempted to ignore the media report, but felt compelled to clarify the situation due to plethora of phone calls he was still receiving from people who were confused about the said report.

“To clear the minds of doubting Thomases and those behind the orchestrated news in circulation and particularly those who had been calling to ascertain what actually happened at the Shehu Musa Yar’adua centre”.

“The meeting commenced but few minutes into the session, his attention was drawn to the presence of some people walking up to where he was seated. At closer glance, he recognized them to be politicians and they exchanged pleasantries, saying they came to greet him and they walked out again from the meeting”.