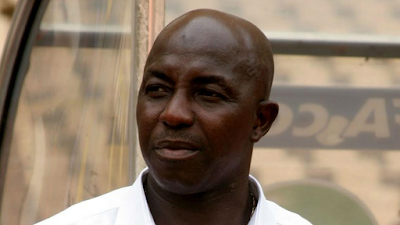 Coach of Under 23 football team at Rio Olympics Samson Siasia has made a sensational and revealing rant at the NFF and Sports Ministry ahead of the quarter final clash against Denmark on Saturday.The Bayelsa born coach made some startling revelations, saying he’s been owed salary for five months and that he and his players have been disrespected by the Nigeria Football Federation and Sports Ministry all through out their Olympic journey.
According to Siasia, he has begged his players to carry on playing for the country up till this point but he is tired and that if the players decide to boycott the quarter final match against Denmark at Rio 2016, he’ll support them.

“We have been disrespected from all angles – the sports ministry, the Nigeria Football Federation. Is that how you will treat your own children? We are not street kids,” former Super Eagles coach Siasia said on Brila FM Sports Radio on Friday morning.

“We have only been paid allowances for 11 days. There is no match bonus. What of all the months we have been training in Nigeria and Atlanta? That’s not fair. I have not received my salary for the past five months. Everything is upside down and the boys don’t want to play anymore. Whatever they want to do, I’m with them. They are right for fighting for their rights.”

Siasia continued: “The country already has a bad image, but through football it has got some good image, but still they won’t let us play.

“I have begged these boys, but I cannot do more than what I have done to get this team up to this point. I have done my best and now I am tired.”

The NFF in a statement denied ordering the players to return their Jerseys back to the NFF’s office in Nigeria after the Olympics, but Siasia also slammed the report, saying they were ordered to return their kits.

”The NFF ordered that they bring back the jerseys (from Brazil). Siji Lagunju (of the NFF technical department) was directed to bring the jerseys back to the NFF.