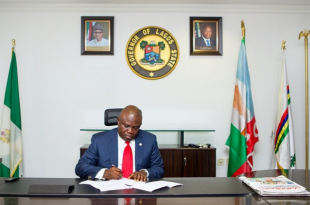 Governor Akinwunmi Ambode of Lagos State, on Tuesday, approved the appointment of Mr. Seun Anibaba as the new Chief Executive Officer (CEO) of the Lagos State Lotteries Board.

Anibaba graduated from the University of Oklahoma and the New York University, both in the United States of America, where he obtained a Bachelor of Science degree in Accountancy and a Masters Degree in Business Administration respectively.

He was the Chief Executive Officer and founder of the DPR Wealth Management LCC and was Senior Special Assistant to the Governor on Business and Marketing Strategies before his current appointment.

Anibaba replaces Mr. Lanre Gbajabiamila who was named the new General Manager of the Lagos State Infrastructure Maintenance and Regulatory Agency (LASIMRA). Besides, Governor Ambode also approved the appointment of Mr. Steve Oshinowo as the new Secretary of the Lagos State Scholarship Board.