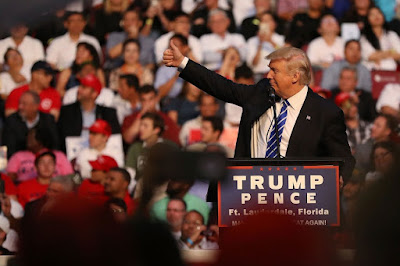 Donald Trump told the crowd that “ISIS is honoring President Obama,” Trump insisted at a campaign stop in Florida. “He’s the founder of ISIS. He founded ISIS.” Actually, he amended, Obama wasn’t wholly responsible: “I would say the co-founder would be Crooked Hillary Clinton.”

The BBC reports that Mrs. Clinton responded by accusing him of “trash-talking” the US and echoing the talking points of Russian President Vladimir Putin.

Mr. Trump stood by his remarks on Thursday, using a sports phrase to say Mr. Obama and Mrs. Clinton were the Islamic State’s “most valuable players.”

The Republican presidential nominee has endured 10 days of negative headlines after a string of controversial comments.

Most recently, he appeared to urge his supporters to take up arms against Mrs. Clinton to stop her from appointing liberal judges to the U.S Supreme Court if she wins the election.

Republican presidential nominee during a edia backlash, went on to clarify that Obama and Clinton had created the power vacuum that allowed the militant Islamic extremist group to flourish by withdrawing U.S. troops from Iraq. “Instead of allowing some small forces behind to maybe, just maybe, keep it under control, we pulled it out,” he argued. “Then Obama came in, and normally you want to clean up and he made a bigger mess.” On Thursday morning, however, Trump appeared to jettison this more defensible.

Hewitt: Last night you said that the president was the founder of ISIS. I know what you meant, you meant that he created the vacuum, he lost the peace.

Hewitt: But he’s not sympathetic to them. He hates them; he’s trying to kill them.

Hewitt: By using the term “founder,” they’re hitting you on this again. Mistake?

Trump: No, it’s no mistake. Everyone’s liking it. I think they’re liking it.