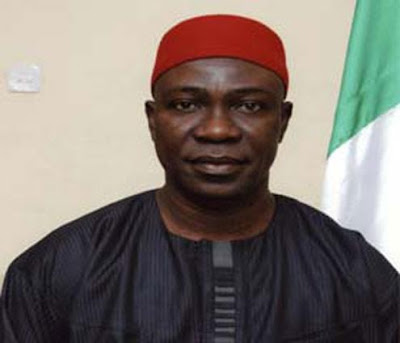 The Deputy President of the Senate, Senator Ike Ekweremadu, will deliver the 2016 edition of the United States of America (USA) Constitution Day Lecture entitled the “Influence of the U.S Constitution on African Democracies”.
This was announced by the U.S Law Library of Congress, the organisers of the annual event, at the weekend.

By this, Ekweremadu, who is both the Deputy President of Nigerian Senate and Chairman of the Senate Committee on the Review of the 1999 Constitution for a record third term, will be the first non-U.S citizen to deliver the august lecture commemorating the ratification of the world’s oldest written constitution on September 17, 1787.

The statement reads in part: “In commemoration of Constitution Day, the Law Library of Congress will host a discussion about the influence of the U.S. Constitution on African democracies. The event will feature His Excellency, Sen. Ike Ekweremadu, the Deputy President of the Senate of Nigeria, and immediate past Speaker of the Parliament of the Economic Community of West African States.

“The discussion will take place at noon on Wednesday, Sept. 7, in room LJ-119 of the Library’s Thomas Jefferson Building, 10 First Street S.E., Washington, D.C. The event is free and open to the public; tickets are not required.

“Sen. Ekweremadu is a ranking Senator of the Federal Republic of Nigeria, having been consecutively elected into its Senate in 2003, 2007, 2011 and 2015. He is also known for his guidance in overseeing the first (three sets) and only amendment(s) to the 1999 Constitution of Nigeria.

“He has held several elective and appointive positions before coming to the Senate.

“Sen. Ekweremadu has published and spoken extensively on constitution-making in emerging democracies. He is the author of the book ‘Who Will Love My Country: Ideas for Building the Nigeria of Our Dreams’ (2016) and lead author of the book ‘Constitutional Review in an Emerging Democracy: The Nigerian Experience’ (2014).

The organisers also noted that the “Constitution Day was established by (U.S) Congress in 2004 to recognize the ratification of the U.S. Constitution on Sept. 17, 1787”.

“The Library of Congress is the world’s largest library, offering access to the creative record of the United States—and extensive materials from around the world—both on site and online. It is the main research arm of the U.S. Congress and the home of the U.S. Copyright Office.

“The Law Library of Congress was founded in 1832 with the mission to make its resources available to members of Congress, the Supreme Court, other branches of the U.S. government and the global legal community, and to sustain and preserve a universal collection of law for future generations.

“With more than 2.9 million volumes, the Law Library contains the world’s largest collection of law books and other resources from all countries”.