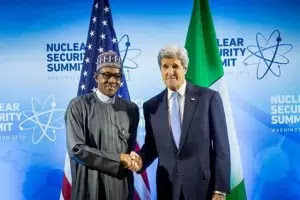 The Christian Association of Nigerian (CAN) berated the visit of United States (US) Secretary of States, Mr. John Kerry to Nigeria.CAN alleged that the visit was discriminatory, personal and divisive.

It was alleged that the visit was targeted to sustain the   persecution of Christians in the country.

Secretary of States, two-day visit has attracted a lot of questions from Christian leader about how sincere was it to average Nigerians.

Rev. Supo Ayokunle  who is the CAN President told reporters that Kerry’s action meant lack of respect to the heterogeneous nature of the country. He accused the American official of favouring a section of the country and Muslims to the detriment of the Christian community.

Kerry   visited the Sultan of Sokoto, Sa’ad Abubakar III, met with the 19 northern governors, three of whom are Christians. At the Presidential Villa, where he was hosted by President Muhammadu Buhari, Kerry met with select northern governors, which also irked critics on the selection process of his hosts.

The Nation Report that,  Ayokunle was not comfortable with his visit that the attitude and disposition of the U.S. Secretary of State and the discrimination he adopted during the visit supports accusations that the President Barack Obama’s administration, alongside Kerry and other strategic U.S. politicians in the Obama’s government openly supported the All Progressives Congress (APC) in the 2015 general elections, which produced the Buhari presidency.