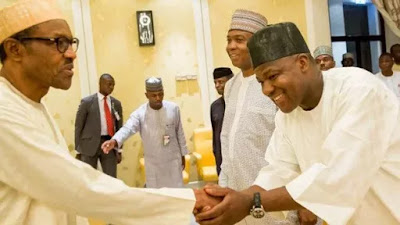 The Economic and Financial Crimes Commission (EFCC) has commenced investigation into the allegations made against Speaker Yakubu Dogara.

The former chairman of the House of Representatives committee on appropriation Abdulmumin Jibrin, EFCC-commences-, had alleged that Dogara and some principal officers padded the budget with line items worth N284 billion. He also other allegations against the speaker and others accused include the deputy speaker, Yusuff Lasun, chief whip, Alhassan Ado Doguwa, minority leader, Leo Ogor and nine others.

The Nation reports that the anti-corruption agency has written the clerk of the National Assembly, Mohammed Sani Omolori, and the permanent secretary of the budget and national planning ministry asking them to produce documents on the contracts awarded by the Assembly and executed from June 2015 to date.

The Nation quoted a source as saying: “Although no timeline was indicated in the two letters, the clerk  and the permanent secretary are expected to treat it with dispatch. “All these documents are vital to the ongoing investigation of all the petitions with us.” It was learnt that Jibrin was at the commission on Monday, August 8, for interrogation and to provide details about his allegations.

According to the letter as reported, the National Assembly is to provide the beneficiaries of the contracts, the account details into which payments were made, the total amount already paid for each contract and the outstanding balances where applicable.

A source, according to the report, listed the allegations the EFCC is working on to include duplication of contracts by Speaker Yakubu Dogara, renting of guest houses for the speaker  at very high rate, receiving of self-rent by the speaker and others at inflated cost when they have already got accommodation allowances, abuse of office and mismanagement of funds by House leadership. Meanwhile Udo Udoma, the budget and national planning minister, has said the federal government is not implementing a padded budget.