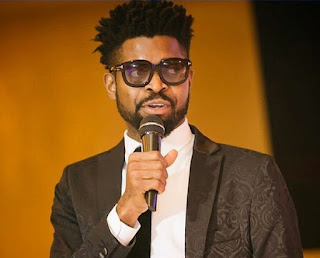 Nigeria popular Comedian Basket mouth  address the issue on politics and the present government.took to his IG  page to address it. According to him, “i never campaigned for any politician nor i am a politician, my job is simply put a comedian, this comes after fans troll him for his recent criticism on Buhari’s administration.

I usually try not to pay attention to comments from people that assume stuff or those who judge others based on perceptions. However I have also come to agree that when lies are said often enough, they begin to sound like truths. So I think it’s best I use this medium to clear the issue of “campaigns” and “support” now. While many of my colleagues, friends and family members campaigned for the PDP, APC and various candidates during the last elections (and I cannot emphasize enough that it is their RIGHT to do so), I never campaigned for Buhari or any other politician. ALL those saying that I did should do everything within their power to “THINK”. I know thinking can be a very difficult task for some but trust me, it can be a painless and enlightening process. THINK of when I ever “CAMPAIGNED” for BUHARI!!.. Indeed I personally HOPED that he would win the election and perhaps that was evident in my “body language” and I am happy he won. But I did not campaign for him. Nigeria was in a bad place by the end of the last administration and it was only a matter of time before we would have suffered the plights of Brazil and Venezuela. Truth of the matter is that I would have voted ANYONE that could speak 2 words of English against GEJ and that’s strictly based on the amount of greed and selfishness we witnessed from members of his administration in the 6 years that he sat on the rock. They put us in this Septic tank we are in right now…..well, that and the oil price downfall amongst other things. I have said it numerous times that I am not a politician hence I try not to dabble in politics. However I think a few people interpret crying out against injustice by the one as campaign for the other. When the Late FELA KUTI and BOB MARLEY cried out against the injustices in their days, were they being partisan? Of course not. They were just being HUMAN!I am forever grateful to God for blessing me with a flourishing career, a beautiful family, food on my table and small change in my pocket. However I see too many people everyday who have not been so lucky to travel and see the way things are outside Nigeria/Africa. I have seen how GOVERNMENT can influence and affect the lives of the downtrodden positively. I am still patient, praying and hoping that PMB can turn Nigeria’s economy around and help strengthen Nigeria’s social justice system. Not so I can cheer him and be vindicated that I was right and some were wrong, but so my friends, family members and well-wishers who haven’t been favored as others can have renewed hope in our country Nigeria and the brotherhood we have enjoyed in this generation. Even the United States went through a tough recession in 2008 and with some patience they have been able to turn that around.So long story short, did I campaign for PMB? NO! Do I support and PRAY that his administration should succeed and improve the life of the common man, increase security, food, jobs, infrastructure, quality of education, healthcare and every other area that will make Nigerians proud wherever they may find themselves? YES!!On the other hand, should he and his party fail, we are all free to cast our votes for the next man come 2019 and I shall be exercising that right. No need for quarrel.