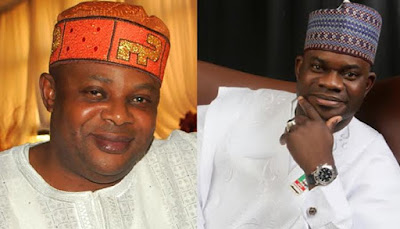 The Appeal Court sitting in Abuja on Thursday upheld the election of Kogi State Governor, Yahaya Bello.
A five-member panel led by Justice Jumai Hannatu Sankey held that the appellant, James Faleke, failed to substantiate his allegation that Bello was not qualified for the election.

James Faleke, who was the ex-running mate of former APC governorship candidate in Kogi state, Abubakar Audu, James Faleke, to nullify the installation of Yahaya Bello as the APC candidate in the state’s governorship
Justice Sankey, who read the lead judgment, resolved all the six issues determined against the appellant.

The panel consequently upheld the judgment of the election tribunal and dismissed Faleke’s appeal.
After the sudden demise of Audu on November 22nd last year, Yahaya was replaced as the APC candidate for the state governorship election.Faleke had approached the court to argue that the votes polled by the party in the election were his, since he was the running mate of the deceased, Abubakar Audu. Ruling on his appeal today, Justice Jummai Sankey noted that according to Section 221 of the Nigerian constitution, only the party, not an individual, could canvass for votes. Justice Sankey in her ruling, stated that the Nigerian constitution does not recognise independent candidature and so Faleke cannot lay claim to the number of votes polled before the demise of Audu and after the election was concluded.Justice Sankey added that Faleke was only paired with Audu after the primaries had been concluded but Bello participated in the primary election that produced Audu as the party’s flagbearer.